Stay positive. It will get better. Have a good weekend #pekanbaru #hotelpekanbaru
- Saturday Jan 4 - 11:26am

Average temperature throughout the year is between 23 – 31 degrees. In a year, we will notice a dryer months peak at July and wetter months with lots of rains around November.

Bahasa Indonesia is the formal language spoken in Pekanbaru, which is quickly followed by Minangkabau and Malay languages. This is due to the great population of both ethnics in the city. In addition, Hokkian is greatly spoken by Tionghoa people as well.

Now there are more than 1.1 millions people living in Pekanbaru. We have seen economic growth in recent years due to oil revenues. Most of Indonesia’s petroleum is produced in Riau. International oil companies such as Chevron from USA as well as other local companies have established their offices in Riau province.

Below is the picture of Pekanbaru airport that has been operating since 1980s. 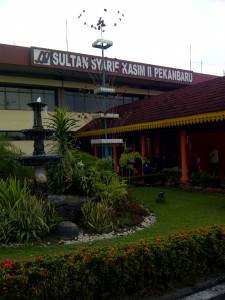 From 2012, the new airport of Pekanbaru has been operational. It is now bigger with modern look and cater for more passengers.